We spent one afternoon in Amsterdam. Why did we go to Amsterdam for only an afternoon? A chocolate store. That’s why. A chocolate store that William went to once before, fell in love with, and has been telling me about for the past four years.

We took the train from London early Friday morning to get to Amsterdam. I love traveling by train. It’s so much easier than flying. They are smooth, so no chance of crazy turbulence; they are quiet, if you’re not in a car with screaming children; and they are so convenient. We took the Eurostar (my first high speed train), which went straight to Amsterdam with only a couple stops on the way, for a total trip length of 4 hours. Everyone keeps asking me what the Chunnel was like… it’s just like going through a long tunnel for about 30 minutes.

We enjoyed the remainder of our baked items from Beyond Bread for our breakfast while on the train. Europe definitely has better gluten-free bakeries.

When we arrived in Amsterdam, our first stop was to drop off bags at our Airbnb. I’m pretty sure this was the cutest Airbnb I’ve ever stayed at. It was in an original 17th-century canal house and was so perfectly and thoughtfully styled.

I aspire to having such a classy place. The pictures don’t even begin to do it justice.

We had lunch at Croque Madam, a 100% gluten-free deli. I had a pastrami sandwich and William had what they called a “monster burger”, which it truly was. I’m impressed that he was able to conquer that. We finished it off with a warm stroopwafel.

This place wasn’t super amazing, but it was safe food.

This was my first time in Amsterdam. I was quite taken with the styles of the houses, the canals, and the multitudes of bicycles everywhere. I was also struck by the number of buildings leaning at precarious angles. I’d be quite concerned if I actually lived there.

I loved the amount of ivy growing on some of the buildings. It was really beautiful.
The shutters make this building appear as if it’s about to take flight.

Chocolátl. The reason we were in Amsterdam. It was fantastic. It had a great variety of bars and many that we hadn’t seen before. The owner is also super friendly. He was happy to answer all our questions and let us sample chocolate. One reason William loves this store is because they have samples of every bar hidden away in little shelves that pull out from the bookcases. It’s a very clever design and unique use of space.

The owner served us each sample on a little cutting board.

Aside from a number of chocolate bars, we each got a drinking chocolate from a different origin. Honestly, my favorite part of the store was the cat. I’m not usually a cat person, but this one was quite entertaining. We found out that he’s a neighborhood cat that roams between stores and acts like he owns them all. He was incredibly friendly and had quite the personality. He loves attention and has no qualms with jumping up on the counters and knocking things off when he wanted more. The owner wasn’t phased at all and we all got a good laugh.

This cat… just acting like he owns the place.

Our dinner spot was an hour away by foot, but we opted to walk there to see more of the city. It’s definitely a pretty city and the canals are very unique. I was surprised (and sad) to not see any street art while walking around. Honestly though, the number of bikes there is mind-blowing. They are practically piled on top of each other, and on some streets you can’t even walk on the sidewalk because of it.

Can we take a moment to applaud these drivers who parallel park on the edge of the canals without any curbs or railings? I’m impressed!

We finally made it to La Viña for dinner – tired and with very sore feet (we’d been walking about 6 miles each day). The food was well worth the walk though. It’s a Mediterranean restaurant and wine bar in the south of Amsterdam. They thoroughly understand gluten allergies, which was a huge relief and the food was excellent. One of our favorite dinner spots on the trip. Everything was cooked creatively and perfectly.

We even tried the fries “dutch style”, which are served with mayo instead of ketchup. Odd, but not bad.

I’m not sure that I’d go back to Amsterdam. The buildings styles were interesting, the canals beautiful, the ivy unique, but the city itself didn’t feel like it had very much life. I missed the diversity in people and food and the street art that I’m usually drawn to in other cities. I imagine that if I spent more time there I’d find things that I really liked (like our dinner spot), but there are just so many other places to explore in the world…

Our adventure continues in Paris… check out the third and final part of our trip in the next post.
Part 1: London
Part 2: Amsterdam
Part 3: Paris 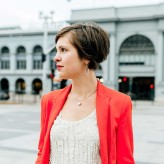